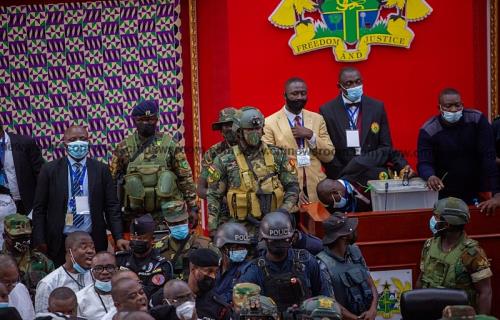 The Chief of Defence Staff (CDS) of the Ghana Armed Forces (GAF) has been tasked to investigate the circumstances that made its Commander deploy some armed soldiers to maintain order in the chamber of Parliament during the election of the Speaker, in the early hours on January 7, 2021.

Mr Albert Kan-Dapaah, the Minister-designate for National Security, said at his vetting by Parliament’s Appointments Committee, on Wednesday.
Mr Kan-Dapaah stated that President Akufo-Addo and other government officials were not happy with the ‘invasion’ of Parliament by the soldiers and thus called for an investigation into the matter.
“This is obviously a strange thing when you have soldiers going into the parliamentary chamber for whatever reason.
“When I saw it, I was also alarmed, my colleagues were alarmed, all of us in government were alarmed that something like that had happened. So I did take the trouble to find out how it happened.
“Somebody, a commander, in his opinion, thought that things were getting out of hands in the chamber, and that they needed to go there to try to restore order.
“I posed the question, what order? Did you think your presence there was going to frighten the members of Parliament? No!…. You were not going to be able to frighten them. Were you going to arrest them? No. You couldn’t have arrested them.
“So I asked, What was the motivation? I can only say that this is not something that should have happened. Going forward this is not something that we should encourage,” Mr Kan-Dapaah stated.
The Minister-designate said after the investigations, the report would be made available to Parliament, adding that, appropriate sanctions would be applied should the inquiry turn out that the Commander had acted unprofessionally.
The election of the Speaker of Eight Parliament was characterised by chaos with the elected members on the political divide fighting over sitting on right side of the Speaker to indicate their majority in the House, kicking of voting booths and snatching of ballot papers, among others.
The unfortunate events were widely condemned by Ghanaians across the country.
Source: GNA