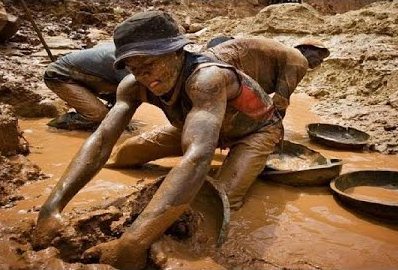 The Media Coalition Against Galamsey (MCAG) has identified the justice delivery system as the weakest link in the fight against illegal small-scale mining, also known as galamsey.

It said from investigators to prosecutors to the Judiciary have not been helpful and urged the courts to incorporate deterrence in applying the law to people found guilty.

A statement issued by the Coalition, and copied to the Ghana News Agency in Accra on Monday, said the prosecution of galamsey financiers and the ultimate beneficiaries of the illegality was long overdue.

It therefore, urged the media to focus on investigative work that would expose those financiers, name and shame them while aiding with prosecution.

“This is a critical national cause and it is the hope and expectation of the MCAG that we should not sacrifice this noble course on the altar of any partisan or sectoral parochial interest.

“We call on all well-meaning Ghanaians to support the cause to ensure sustainable mining activities and do away with the illegality that is destroying our environment,” the statement said.

It said galamsey has become the test for competence in the management of the expectations of Ghanaians and a “trojan horse” for governments in the past four decades.

The statement called for the immediate launch and execution of the Multi-Sectoral Mining Integrated Project (MMIP), with all stakeholders, especially the media to track its progress.

It said there was the need for the Minerals Commission and the Environmental Protection Agency to be decentralised and equipped to carry out regular inspections as well as enforce the laws and regulations.

The fight against galamsey required shared and collective efforts of the entire citizenry, the statement said, adding that suggestions from stakeholders must be considered for implementation to ensure sustainability of the mining sector. These include the need for the Operation Vanguard to continue its operations in a collaborative manner with extended time in accordance with the rule of law, and the reinforcement from the army in the form of surveillance on water bodies. They should be supported with necessary human capacity and logistics including night vision equipment, drones and other technology to aid the fight.

The Coalition noted that since its inception over a year ago, it had engaged in eight town-hall meetings, media conferences and stakeholder engagements in galamsey endemic districts and regions, meeting various stakeholders including government and some traditional leaders, who declared their commitment to the fight.

It said it unanimously agreed that it was time to restore the water bodies, forests and farmlands to sanitise the entire mining industry.

The Coalition said there has been a significant reduction in cases of galamsey activities and an appreciable reduction in turbidity levels in some river bodies.

During the period of the campaign, it became evident that there was participation of foreigners, especially Chinese, in small-scale mining using all manner of cover-ups.

You Don’t Have Power To Legislate Prophecies – Agyin-Asare To Police
4 Ghanaian Students Deported, Banned From UK Over Forged Scholarship Papers
A Proud Day For Ghanaian Peacekeepers As 24 Police Officers Get UN Medal
Some Tema East NDC Executives Celebrate Bagbin And Mills
Ghana Develops New Standard To Aid Cocoa Image Pricing
Price Of Petrol To Go Up By 4% This Week