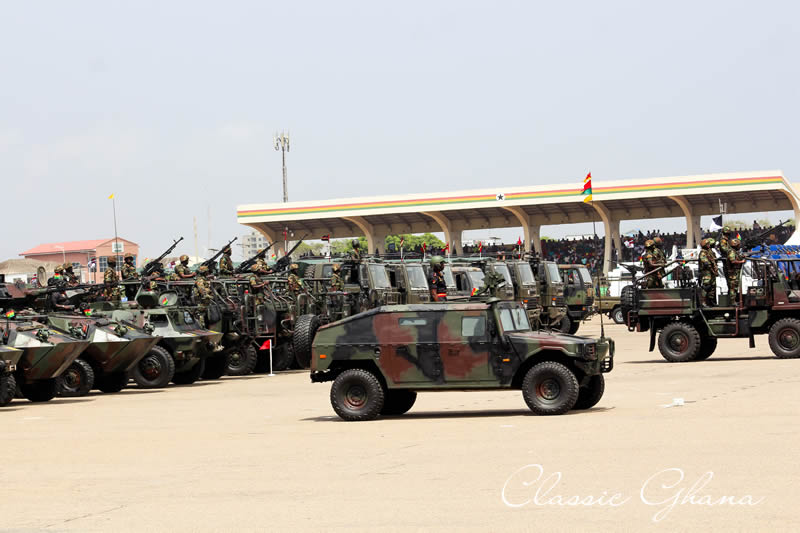 Ghana Armed Forces would soon re-introduce promotional examinations for other ranks to progress to higher ranks, Brigadier General Mohammed Aryee, the Commander of the Army Training Command, said on Thursday.

Speaking at the passing out parade of the Basic Infantry Training Course 2/2017 at the Army Recruits Training Schools in Shai Hills in the Greater Accra, Brigadier General Aryee, said promotional exams used to be in existence in the 80s but was cancelled.

He said the Forces thought it prudent to re-introduce it to serve as a sense of purpose for other ranks to be abreast with the basic knowledge about the Forces.

Brigadier General Aryee assured the officers’ of human and material resources to assist them in upgrading their knowledge for progression.

In all 328 recruits pass out of the course out of the total of 355, while the rest were sacked due to failure to pass fitness test and other misconducts.

Brigadier General Mohammed Aryee, cautioned the newly recruited junior officers to exhibit high sense of professionalism and not put the law in their hands by engaging in unauthorised operations.

“As soldiers you fall under both the civil laws of the country as well as military law and regulations. The Military High Command detests unwarranted and unnecessary confrontations between military personnel and personnel of other security agencies, especially the police,” he stated.

“The Armed Forces is not a place for everybody, the Forces have certain basic standards with regard to medical and physical fitness, discipline and mental aptitude which must be demonstrated by all its members. Failure to meet these standards means that you cannot be a soldier.”

Brigadier General Aryee urged the newly recruits to put in a lot of efforts to address any weaknesses as far as their physical fitness was concerned, since they would have to pass basic fitness tests every year.

He stated that the Armed Forces institution had couched a respectable name for itself, both locally and internationally, as a result of high standards of discipline, self-sacrifice, and would not condoned any acts of misconducts from them.

He urged them to uphold high sense of responsibility in the discharge of their professional duties, since their actions and conduct would be monitored and observed by the community and the media,

“The Military High Command has zero tolerance for acts that do not conform to the cherished values of the Armed Forces and that any officer found guilty of wrong doing would face the full rigours of the law,” he said.

He advised parents not to used them to settle their personal scores and other unauthorised duties.

Lieutenant Colonel Emmanuel Gyadu, the Commanding Officer of the Army Recruit Training School, Shai Hills, advised the recruits to eschew behaviours which tended to tarnish the image of the Military.

He further urged the recruits to live exemplary lives, as they would be held accountable for any acts of misconduct.

The recruits were train in minor tactics and field craft, weapon handling and marksmanship, map reading, military law and first aid, some liberal education, and orientation in the jungle warfare to build their leadership capabilities to explore their potentials.

The recruits exhibited immaculate display of drill during the passing out parade which was inspected by Brigadier General Aryee to the admiration of the gathering.

Accident On Suhum-Nsawam Highway Claims 3 Lives
Kenya: Man Arrested For Forcefully Trying To Circumcise His Wife
One Chinese Arrested, Six Ghanaians Escape For Illegal Mining
More Than 49,000 Children Trapped In Child Labour On Volta Lake
If I Wanted The Judges Dead I Would Have Done That In 1979, Not 1982 - Rawlings
KNUST Streamlining Agricultural Research To Boost Food Production