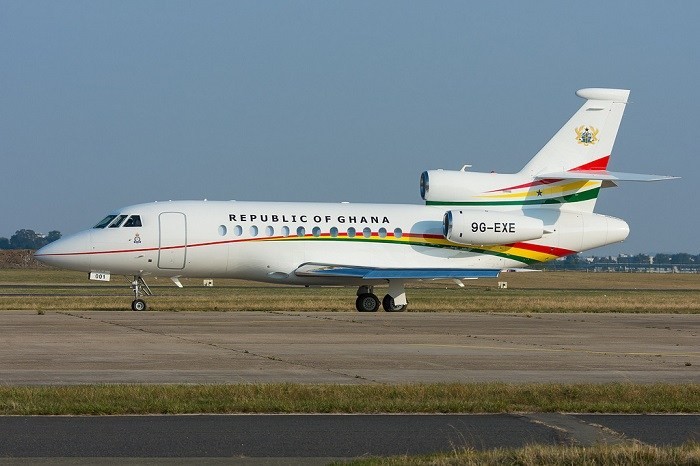 The Ghana government is in the process of acquiring a bigger aircraft for presidential travels, Mr Eugene Arhin, Director of Communications at the Presidency, has disclosed.

“Government is already in the process of acquiring a bigger jet for use,” he said at a press briefing at the Jubilee House on Monday.

Mr Arhin was answering a question on whether the government intended buying a bigger aircraft to accommodate the President and his entourage on official foreign trips as the current presidential jet had proven inadequate for the purpose.

He explained that the move to get a bigger fit-for-purpose aircraft was part of a cost saving measure on the travels of the President and other key state functionaries.

Mr Arhin did not give the specifics of the aircraft deal, but said the Defence Minister would shed light on the development at the appropriate time.

The President’s foreign travels have generated discussions on the airwaves and on social media lately, with some Ghanaians asking why the President has to fly on hired private aircraft when the country owned a functional presidential jet.

But the Defence Minister, Dominic Nitiwul told Parliament that the configuration of the current Presidential jet, a falcon 900EX purchased during the era of former President John Kufuor, did not meet the travel needs and security of the President.

“This aircraft will carry a load of 11 persons minus the crew. When this aircraft is travelling to the eastern part of the USA or Asia, it will not load a crew of more than eight plus the luggage. So it depends on where it is going.

“Secondly, I have also said the aircraft has to do refuelling stops, and also in this COVID-19, when you are travelling to multiple destinations like the president’s recent travel, the Falcon couldn’t have been taken because he would have had to do technical stops which are not desirable, and when he is travelling with more than 20 people like he has been doing for business trips that brought huge sums of money for this country, he will need more than just a Falcon, otherwise, the others would have to go a day ahead before the president to prepare themselves,” Nitiwul stated.

Former President Kufour before leaving office in 2008, made provisions for the procurement of two aircraft for the Ghana Air Force, which included a larger jet for use by the President and his delegation on state travels. But the deal was however abrogated by the Mills administration.

According to the Defence Minister, if that arrangement had held, that bigger aircraft would have been deployed for the strategic lifting of troops, and could be reconfigured into presidential jet for the president’s travels to save the country the huge amounts spent for delegation who travelled ahead of the president.

He told a private radio station in Accra that since the cancelation of the deal for acquisition of the bigger aircraft by the Mills administration, the country had spent in excess of $50 million on official trips of the government.

Touching on the issues arising from the appointment of Metropolitan Municipal and District Assemblies Chief Executives (MMDCEs), Mr Arhin dismissed the allegation that some of the MMDCE’s nominated by the President were not originally shortlisted for those positions.

He said the claim by some civil society organisations (CSOs) that about 44 per cent of the MMDCEs were not recommended by the three-member committee that vetted their nominations, and 10 per cent of the nominees did not apply for the positions, was false.

The Communications Director stated that those allegations were based on a supposedly leaked report on the nominees shortlisted for the MMDCE positions.

“I can say on authority that that report was not the report that was submitted to the President,” he said, adding that the President was not bound by any law to resort to any report to hire or fire his appointees.

“He is not bound by the recommendations of any report. He decides what he has to do,” he said, stating emphatically that the President was satisfied with his appointments and unruffled by the threats that some of his appointees would not secure the two-thirds majority votes to gain approval of their local assemblies.

“It is a human institution so we expect that there would definitely be agitations. If at the end of the day, voting is conducted and a nominee is rejected, the President can renominate that person on two occasions.

“If on all the two occasions that person is rejected, the Constitution gives him the power to present somebody else. Agitation is a normal phenomenon of human life,” he said.

Mr Arhin also indicated that President Akufo-Addo had begun a process to assess the work programme of his ministers for the rest of 2021.

He explained that the consultative meeting with the Ministers will ensure they were in tune with the President’s agenda for his second term in government.

Mr Arhin said the President was scheduled to embark on a week’s tour of the Eastern and Ashanti Regions from Friday, October 1, 2021.