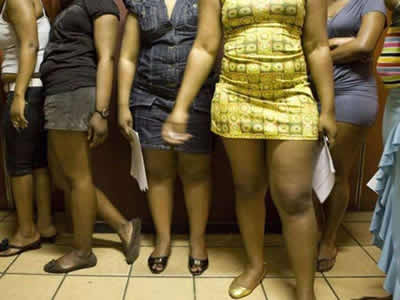 Three young ladies trafficked from Nigeria and forced into prostitution in Ghana have been rescued by the police at Tarkwa in the Western region.

The police are looking for a fourth victim.

Five suspects, all Nigerians, have been arrested for their alleged roles in the trafficking of the victims. They are Happiness Sunday, Vivian Omotoya, Joy Chima, Jennifer Joy and Blessing Sunday, all of them currently in police custody assisting with investigations.

According to the police, the young ladies were held captive by rituals they were made to undergo, including shaving their pubic hairs, cutting their nails, submission of their panties and braziers for the preparation of what their traffickers threatened could lead to their deaths should they flout their engagement terms.

The victims were required to work (as prostitutes) and pay ¢6,000 each to the suspects or lose their lives.

Speaking to Graphic Online, the Tarkwa Divisional Crime Officer, Supt. Kwabena Otu Gyabeng said the victims told the police that Vivian Omotoya, their compatriot, returned from Ghana to tell her ‘success story’ about how her business empire in Ghana was doing so well.

Vivian, he said, was able to win the trust and custody of the four young ladies in Nigeria by telling their respective parents that she had a big business in Ghana and therefore needed sales assistants.

Recruitment mode
Pursuant to that, the divisional crime officer said the parents of the four young ladies gladly handed the girls over to Vivian Omotoya who also brought them to Tarkwa about two weeks ago.

The victims, Supt. Gyabeng said, to their dismay, were rather persuaded and pushed into prostitution and other forms of exploitation instead of the sales assistant job they were promised prior to their departure from Nigeria.

He said the police would follow due processes to ensure that their parents were contacted through the Nigeria High Commission in Ghana.