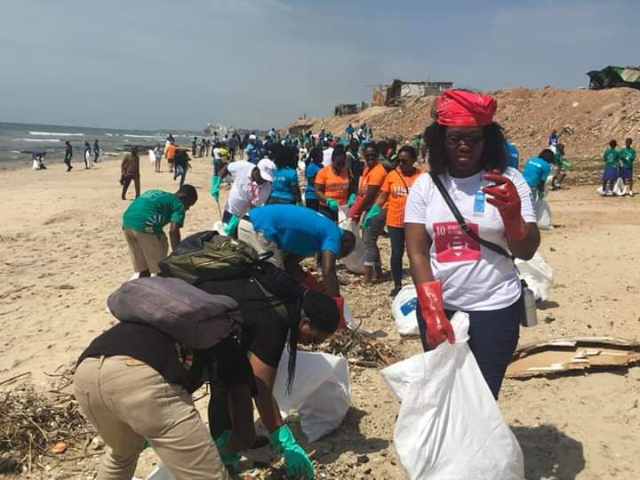 Head of United Nations Office for Project Services (UNOPS), Ifeoma Esther Charles-Monwuba, has charged the government to ban the use of single-use plastics in the country.

Addressing the media on Friday, madam Charles-Monwuba said that careless disposal of single-use plastic waste has become a threat to agriculture, water sources as well as human and marine lives.

The UN Ghana organised a cleanup exercise at the Labamba Beach on Friday to encourage citizens to work towards a clean environment.

The Head of UNOPS asked Ghanaians to take a bold step and replace plastics with paper and ceramics as has been adopted by the United Nations and its staff.

“The UN is deeply committed to this, so in our offices, we are taking action to ensure that we do not contribute any negative impact on the climate,” she said.

She revealed that UN, in its commitment to contribute to clean Ghana, has banned the use of single-use plastics in its offices and events.

“We are taking that to our homes and our communities to ensure that we also influence those around us to also do the same,” she added.

Covid-19: Wear Face Masks In Ghana Or Be Jailed 3 Months
Driver Stabs Passenger To Death, Harms 2 Others
Coalition Takes Steps To Bring Down Malnutrition
At Just 12 And 13, These Texas Brothers Are Feeding The Homeless With Their Own Bakery
Meet The Woman Behind Wazi Vision, The Recycled Plastic Glasses
Man Clubs Wife, Daughter To Death