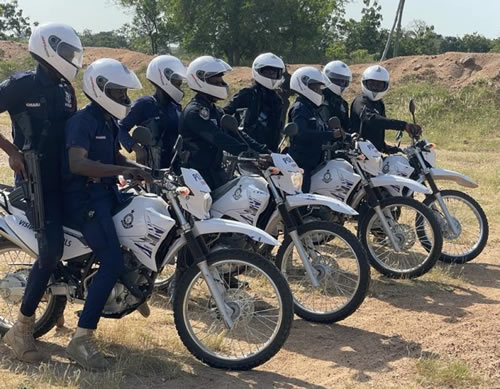 The Upper East Regional Police Command has trained 55 personnel of the Service on Motorbike and High Risk Operations to effectively fight crime in the Region.

The personnel were drawn from the Bolgatanga, Bawku and Navrongo Divisions, the Regional Special Weapons and Tactics unit and the Police Public Safety Training school (PPSTS) at Pwalugu in the Talensi District of the Region, for the two weeks of intensive training.The personnel were taken through riding skills and manoeuvring in built-up areas, effective firing and firing in motion, riding and advancing to a target among other skills.Speaking at the closing ceremony at the PPSTS, the Regional Police Commander, Deputy Commissioner of Police (DCOP) Dr Sayibu Pabi Gariba, the Regional Police Commander, commended the trainers and trainees for their dedication and commitment to the training programme.He entreated the officers to allow the skills they acquired during the training to manifest in their assigned duties so that the Command would derive the full benefit of their training, and further reduce crime rate in the Region.DCOP Dr Gariba assurance the personnel that plans were underway to provide visibility patrols in the Region with the needed logistics to effectively combat crime and maintain law and order across the entire area.The trainees as part of the closing ceremony displayed their skills on the motorbikes as per the training they acquired to the admiration of the Regional Commander and some Senior Police Officers at the ceremony.Notable among the officers were the Director of the PPSTS, Chief Superintendent Wilson Aniagyei, the Regional Crime Officer, Superintendent Ruben Dugah and the Regional Police Public Affairs Officer, Assistant Superintendent of Police, David Fianko-Okyere.