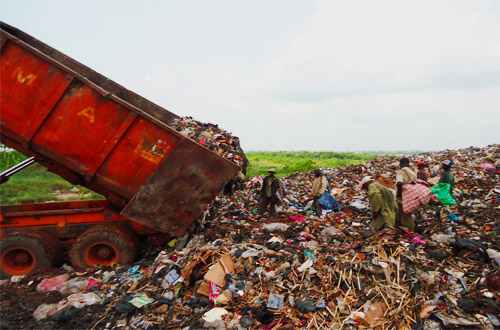 The operators of the Kpone Landfill Site and the Tema Metropolitan Assembly have been called upon to properly manage the landfill site to avoid any outbreak of epidemic in the area.

Ms Cecilia Abena Dapaah, the Minister of Sanitation and Water Resources made the call when she paid a working visit to the facility and expressed worry over the insanitary conditions at the site, particularly the foul stench from the water that leached out of the waste at the site.

This was in a statement signed by Mr Nelson Kofi Akatey, the Public Relations Officer of the Ministry and copied to the Ghana News Agency on Monday.

It said the Minister was accompanied by her two Deputies, Mr Michael Y. Gyato, the Member of Parliament (MP) for Krachie East and Mr Patrick Yaw Boamah, MP for Okaikwei Central, Mr Joseph Obeng-Poku, the Acting Chief Director and some other Directors of the Ministry.

The statement said the visit was for the Minister and her entourage to acquaint themselves with the operations of the landfill site due to several complaints made by community members in the Kpone Katamanso Municipality.

The people have complained about the inconveniences caused by unbearable stench and leachate from the site, especially during the rainy season.

The statement said during the visit, it came out that fumigation at the site to control pests and vectors, which had not been done for the past three months by the Assembly could cause public health hazard in the nearby communities.

It said the entourage noted the broken down of the weighbridge since February 2018 and as a result, the quantity of waste received at the site was based on estimation while inadequate landfill equipment at the site was hampering the effective and efficient operation of the facility.

The Tema Sanitary Landfill site, which is the only engineered landfill facility in the Greater Accra Region was inaugurated in January, 2013, and was designed to receive 500 tonnes of refuse per day.

However, due to inadequate number of final disposal facilities within the Greater Accra Metropolitan Area, close to 1,000 tonnes of refuse is dumped daily at the site and that it is estimated that the landfill site would be full in the next six months as a result of the high volume of waste it is currently receiving.

The statement said in view of the current situation at the site, the Ministry was currently going through the process of constructing additional cells to prolong the life span of the facility.

“Records available indicate that the Greater Accra Metropolitan Area alone generates over 3,000 tonnes of waste daily, out of which the Tema Sanitary Landfill receives one-third,” it said.

The statement said the facility was managed under a management contract by a private service provider with Tema Metropolitan Assembly and operates 24 hours from Monday to Saturday.