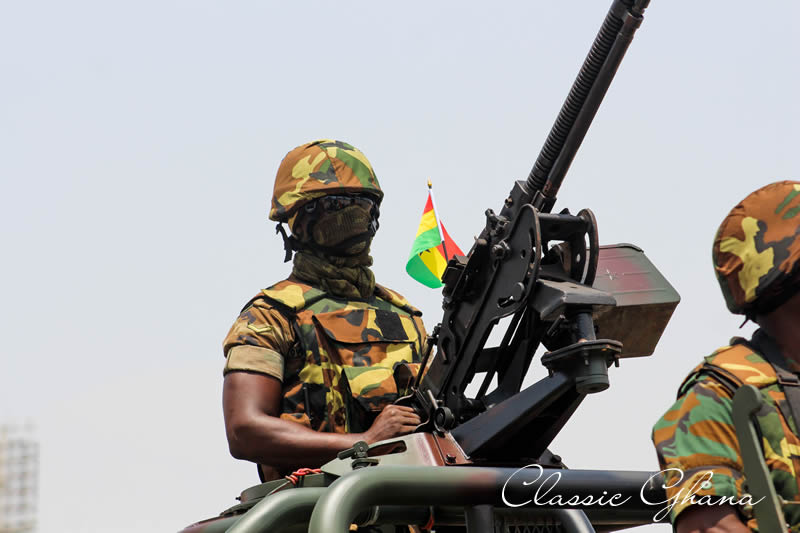 A team of soldiers have rounded up about 50 residents at Faase, a community near Kasoa in the Ga South Municipality, where two soldiers were brutally assaulted.

A day after the attack on the soldiers, most of the men in the town have fled as the troops stormed the area in droves.

Reports from the locality indicate that the soldiers went house to house and arrested residents in a swoop from about 30 communities.

Most of the people arrested are believed to be leaders of the community who incited the youth of the area to beat up the soldiers on Tuesday in a humiliating manner.

Theghanareport.com sources say between 200 to 600 soldiers were deployed in a swift and emergency move with about two choppers hovering around the vicinity.
The assaulted soldiers were protecting a parcel of land which a Chief is claiming ownership of.

The litigation between the local chiefs and the Akyem Traditional Council over the land caused irate youth to launch a bloody assault on soldiers stationed for protection duties.

The two have since been conveyed to the 37 Military Hospital for treatment.

Commenting on the development, MP of Domeabra-Obom,Sophia Karen Ackuaku, explained that the local chief who was trying to protect his jurisdiction told her that apart from petitioning her, he had also petitioned to the Ministry for the Interior, Police Headquarters, Jubilee House, Ga Chief, Ngleshie Chief and Sempe Chief.

With no action on the petition, the chief sought her assistance to organise a press conference and the incident happened on the same day as the media engagement.

According to the MP, one of the men in uniform claimed that he was not from the military and that was what prompted the locals to start beating him.

On developments the next day, she said she had been informed that “this morning they (military) brought another batch again.

There are troops of military men coming with buses arresting the women and the children and the old ladies”.

She said she does not know what the soldiers are seeking, but one of the women in the town told her that at dawn some soldiers “came to her room, they opened her wardrobe and suitcases”.

“Another also said they came to her bedroom; they went to her bathroom and I don’t know what they are looking for,” she claimed.

“I will only plead with them that the young ones between the ages of seven to 12 and the aged that are being humiliated should be looked at again because they are vulnerable,” she begged the military.

The Ghana Armed Forces is yet to comment on the development officially.

Meanwhile, Security Analyst Adam Bonaa, has accused the MP of having a hand in the assault of the soldiers due to her involvement in organising the town folks.

He told Accra-based Starr FM that the MP should be arrested for the development.

Chief calls for the withdrawal of military

In a related development, the Divisional Chief of the Obom stool, Nii Kpakpo Amartey, has called on the military high command to as a matter of urgency withdraw their men from the area.

He described the assaulted military men as ‘hooligans’ who were led by one chief, Nana Kumankuma.

“We want the Akyem traditional council and the Ghana Armed Forces to withdraw the military personnel who have been deployed to protect the chief,” Nii Kpakpo Amartey told the media at a press conference on Tuesday.